Renault Sport is proud to be taking the wraps off New Renault Mégane R.S. at the 2017 Frankfurt International Motor Show. Since the launch of the original Mégane R.S. back in 2004, the model has carved out a strong reputation in the high-performance C-segment and become widely regarded as a benchmark in its class.

New Renault Mégane R.S. takes Renault Sport’s unmistakeable hallmarks of agility, efficiency and driving enjoyment a step further thanks to a more finely-tuned chassis performance permitted by 4CONTROL technology complete with four-wheel steering, a first in the segment. An all-new 280hp/390Nm engine has benefited from synergies within the Alliance, and, for the first time, New Renault Mégane R.S. is available with a choice of two transmission options.

New Renault Mégane R.S.’s expressive, sporty lines point to the model’s performance pedigree and pay tribute to Renault’s longstanding involvement in topflight motorsport.New Renault Mégane R.S. stands out through its specific proportions. In addition to the bespoke lines of its flanks, including wider wings which have been extended by 60mm and 45mm at the front and rear respectively compared with Mégane GT. Meanwhile, its overall width has been increased and new 18 and 19-inch wheels have been designed to provide a better stance and further enhance cornering performance.

The new front bumper incorporates:
• A Formula 1-style blade which, in addition to being a Renault Sport styling hallmark and symbolic of Renault’s commitment to Formula 1, is picked out in a distinctive Gun Metal Grey satin finish that contrasts sharply with the bodywork’s high-gloss sheen.
• A wide air intake to provide air for the intercoolers and engine cooling.
• A specific front grille complete with a diamond grid pattern revisited by Renault Sport. The design of the sides features:
• A silhouette inspired by New Renault Mégane, with sculpted, sensuous lines accentuated by the R.S. version’s wider tracks and wings.
• Extractor vents located behind the front wheels.
• A specific sill design incorporating a black blade that runs along the bottom edge to visually connect the front and rear of the car and suggest a ‘flat floor’ effect, a common feature in motorsport. Rear:
• The new lip spoiler with body-colour vertical mountings designed to generate greater downforce underlines the width of New Renault Mégane.
• The new rear bumper incorporates:
• Mégane R.S. hallmark, centrally-positioned exhaust pipe with a prismatic finish.
• A working diffuser inspired by the world of Formula 1 to negate lift at higher speeds.

A new body colour has joined the Mégane R.S. family – Volcanic Orange. Like Renault Sport’s iconic Liquid Yellow, the new finish benefits from special work to combine a unique sheen with a special effect as light reflects off the body. It also injects added dynamism and is perfectly coordinated with the car’s cabin where the following features contribute to New Renault Mégane R.S.’s distinctive interior ambience: 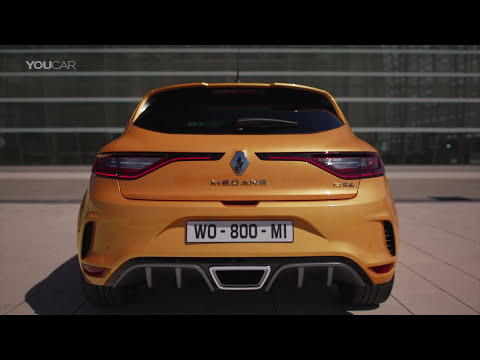 4CONTROL chassis: an exclusive in New Renault Mégane’s class
Renault Sport’s acclaimed engineering expertise has taken the performance of New Renault Mégane R.S. to a new level thanks to two new features that are unique in the car’s segment.

• Courtesy of Renault’s 4CONTROL system with four-wheel steering (a standard feature of both the model’s Cup and Sport chassis versions), New Renault Mégane R.S. is even more nimble through tight turns and more stable when cornering at higher speeds. The steering is more incisive while the turning circle is even tighter when manoeuvring. Carefully configured by Renault Sport, 4CONTROL generates a whole new level of driving enjoyment in the segment.

New Renault Mégane R.S. carries over the key features that helped to forge the success of previous-generation versions.

• The PerfoHub independent steering axis front suspension has been completely redesigned to cater for New Renault Mégane R.S.’s new geometry and is stiffer than before.
• The new Torsen® limited slip differential that comes with the Cup chassis features different lock-up values under acceleration and deceleration for enhanced traction and higher cornering speeds.
• The suspension settings of both versions are specific (springs, dampers, bump stops and anti-roll bar stiffness).

The text content on this page was taken directly from a press release from Renault UK.

Make an Enquiry
Back
Vehicle Valuation
Compare Saved Vehicles
Top
Close
Your Cookie Settings
Select your cookie settings
Strictly Necessary Strictly Necessary cookies are essential to let you move around the website and use its features, such as accessing secure areas, shopping baskets and online billing. These cookies allow our website to provide services at your request.
Functional Functionality cookies are used to remember the choices you make, e.g. your user name, log in details and language preferences. They also remember any customisations you make to the website to give you enhanced, more personal features.
Targeting Targeting cookies collect information about your browsing habits to deliver adverts which are more relevant to you and your interests. They also measure the effectiveness of advertising campaigns.
Save Settings
Cancel Changes