The Volvo estate is a motoring icon. But with the new V90, it’s more beautiful than ever. The V90 is Volvo’s new 5-door, 5-seat large premium estate. It is built on the new Scalable Product Architecture (SPA), Volvo’s advanced modular product platform that will underpin all new Volvo cars in the 90 and 60 Series.V90 takes the premium estate a clear step forward in terms of aesthetics, materials and finish, while living up to the ultimately practical nature of estate cars. 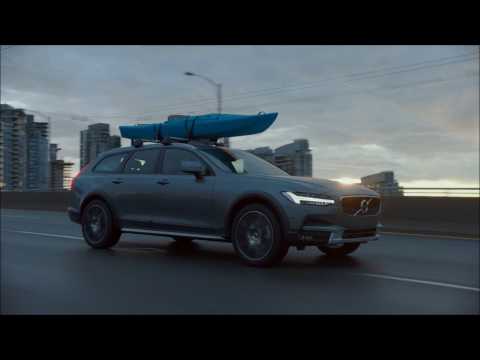 There are 3 model trims to choose from the Momentum, Inscription and the R-Design trim which comes as standard with a revised front bumper with integrated fog lights and a new splitter. The grille features piano black inserts and the five-spoke alloy wheels boast a two-tone diamond cut finish. New floor mats and revised pedals are also fitted as standard, as are sportier front seats with a more heavily contoured design.Two diesel engines are available from launch – the 188hp D4 and the 232hp D5. The latter comes with four-wheel drive as standard, while the D4 sends power to the front wheels – both get an eight-speed automatic gearbox. The plus-400hp T8 petrol-electric hybrid comes later boasting huge performance, cheap running costs and an ability to move under electric power alone.Safety credentials are impressive, with an advanced automatic emergency braking system detecting not only people and cars, but animals as well – coming as standard and a semi-autonomous driving assistant that follows the markings on the road.

The main focus of the V90 is comfort, something the cabin expresses perfectly. The standard leather seats are soft and relaxing. The crown jewel of the interior remains the portrait layout touchscreen, which uses infrared to guess your intentions and comes with Apple Car Play as well as Spotify and Android Auto (later on) without a full screen takeover, meaning you can use both your phone and the car’s screen separately.

Volvo’s T8 Twin Engine delivers all the benefits of a high performance, low emission petrol engine with an electric motor that delivers power on demand with CO2 emissions at just 47 g/km, more than 45 km of pure electric range and a combined power output of around 410 hp. The 187hp D4 model starts off the range and as an entry-level proposition returning fuel economy of 62mpg and emitting 119gm/km of CO2 for a £30 annual road tax bill. The more powerful D5 uses largely the same 2.0-litre four-cylinder, but gets a clever system called Power Pulse, which shoots compressed air into the turbo to make it more responsive.

Free vehicle valuation Thinking of selling your vehicle? Get a free no-obligation market valuation of your vehicle from the team at Park's Volvo. Get Free Valuation
Back
Vehicle Valuation
Compare Saved Vehicles
Top
Close
Your Cookie Settings
Select your cookie settings
Strictly Necessary Strictly Necessary cookies are essential to let you move around the website and use its features, such as accessing secure areas, shopping baskets and online billing. These cookies allow our website to provide services at your request.
Functional Functionality cookies are used to remember the choices you make, e.g. your user name, log in details and language preferences. They also remember any customisations you make to the website to give you enhanced, more personal features.
Targeting Targeting cookies collect information about your browsing habits to deliver adverts which are more relevant to you and your interests. They also measure the effectiveness of advertising campaigns.
Save Settings
Cancel Changes