Make an appointment at McLaren Glasgow or McLaren Leeds​

The McLaren 765LT
at McLaren Glasgow and McLaren Leeds

Everything about the McLaren 765LT focuses on deploying power. Your senses will be heightened as 0-100km/h (0-62mph) takes just 2.7 seconds and 0-200km/h (0-124mph) takes only 7.2. It’s the most powerful Longtail (LT) to date and is the last fully petrol car to be built by McLaren so there was no doubt that the 765LT would be something extremely special.

It’s based on the design of the 720S and its silhouette flows seamlessly with smooth lines and curves in all the right places. Of most importance to any LT is weight and the lighter the better. A strong, ultra-lightweight MonoCage II chassis lies at the heart of each McLaren supercar and is perfect for weight saving. Along with new carbon fibre body panels, motorsport-inspired polycarbonate glazing, a unique and dramatic titanium exhaust system and light dual-spring suspension an additional 57mm has been added to its overall length making it worthy of the famous Longtail name. Its nose elongates by 48mm as the front bumper and splitter move forwards and at the rear there’s an additional 9mm in length as the new active rear wing stretches further back.

It is the incredible rear of the McLaren 765LT that signals this is an LT to the core. The new active rear wing increases downforce and highlights the rarity and extreme character of the 765LT. Produced from carbon fibre it works in conjunction with the carbon fibre floor, unique door blades and the extended rear diffuser to deliver aerodynamic downforce 25% greater than the 720S. The distinctive quad-exit full-titanium exhaust system boasts twice the number than its predecessor and also supports in the weight-saving mission being 3.8kg lighter.

The cabin is alive with sound and feels from the stunning powertrain and does not disappoint. Each sensation is made more vivid by classic LT elements. The interior has been streamlined with ultra-lightweight finishes and carbon fibre as well as all carpeting being removed. Its lightweight seats have been carefully sculpted and there is a bespoke carbon fibre centre tunnel.  As the 765LT is all about driver engagement there is no air conditioning or audio.

It is all about maximum engagement and searing performance. With McLaren’s shortest ever final drive ratio making for incredible in-gear acceleration and a thrilling 4.0 litre twin-turbocharged V8 engine, the power and responsiveness on both track and road is evident. 765PS and 800Nm of torque along with optimised gear ratios – with a unique final drive built from Formula 1 grade materials, give the McLaren 765LT the honour of being the most powerful Longtail. All models are fitted with specially developed Pirelli P Zero™ Trofeo R tyres allowing you to explore cornering speeds beyond the conventional limits.

With its extreme performance, sensational handling, ultra-light chassis and aggressive design, the McLaren 765LT stands out above all others. It raises the game and certainly lives up to the legendary Longtail name.

Only 765 will ever be produced. 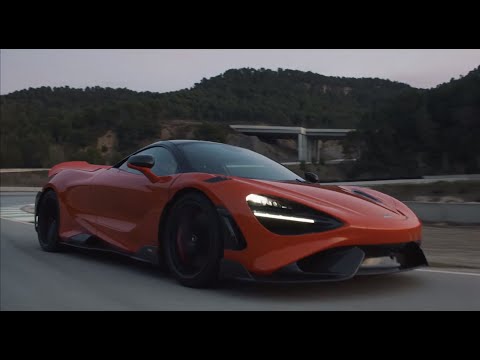 Free vehicle valuation Thinking of selling your vehicle? Get a free no-obligation market valuation of your vehicle from the team at McLaren Glasgow and McLaren Leeds. Get Free Valuation
Back
Vehicle Valuation
Compare Saved Vehicles
Top
Close
Your Cookie Settings
Select your cookie settings
Strictly Necessary Strictly Necessary cookies are essential to let you move around the website and use its features, such as accessing secure areas, shopping baskets and online billing. These cookies allow our website to provide services at your request.
Functional Functionality cookies are used to remember the choices you make, e.g. your user name, log in details and language preferences. They also remember any customisations you make to the website to give you enhanced, more personal features.
Targeting Targeting cookies collect information about your browsing habits to deliver adverts which are more relevant to you and your interests. They also measure the effectiveness of advertising campaigns.
Save Settings
Cancel Changes

This site uses cookies and related technologies for site operation, analytics and third party advertising purposes as described in our Privacy and Data Processing Policy. You may choose to consent to our use of these technologies, or further manage your preferences. To opt-out of sharing with third parties information related to these technologies, select "Manage Settings" or submit a Do Not Sell My Personal Information request.