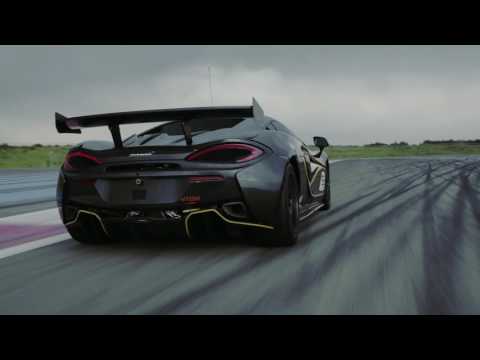 The track-only 570S GT4 shares the same carbon fibre MonoCell II chassis shell as its names sake from the McLaren Sport Series. This is the first time; the road car technology has been translated over into the GT4 category.

The McLaren designed and developed 3.8-litre twin turbo V8 M838TE engine found in the road-legal Sports Series model has been placed into its track-focused counterpart. The seven-speed seamless shift gearbox is also a familiar addition, transferring power and speed to the track via the rear wheels.

The 570S GT4 presents a unique aerodynamic package which includes: a GT4-specification high level rear wing, mounted on aluminium pylons, a greater front splitter and reformed floor assembly. Precise and rapidly responsive power steering provides safe and natural balance with every turn. Under the GT3-inspired bonnet sits an additional front centre high temperature radiator with exit ducts. These upgrades have been designed with a focus on lap times, the aerodynamic performance and cooling aspects of the McLaren 570S GT4 ensure that is has the ability to performance in the most extreme race conditions worldwide.

Carbon fibre and aluminium have been used to re-structure the bodywork, which widens both the front and rear to accommodate the centre-locking lightweight cast magnesium alloy wheels and Pirelli racing tyres. Two-way adjustable motorsport dampers with coil-over springs have been fitted to the front and rear, as well as an on board air jacking system. The driver’s protection maintains top priority – the 570S GT4 is further enhanced with an FIA-approved roll cage, a fire extinguisher system and a six-point race harness to keep the driver securely in place as their speed and cornering force rises.