The BMW Z4 is reborn with a contemporary take on an unforgettable classic. Featuring an enhanced kidney grille, striking split twin exhaust pipes, modern LED lights and an elegant soft-top taking any journey to a new level of enjoyment. 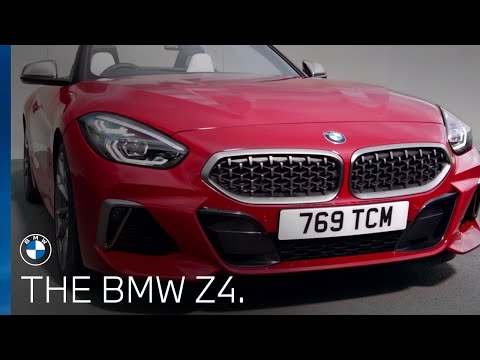 Design
The BMW Z4 is designed to stand out from the crowd. Its striking 18” alloy wheels, eye-catching San Francisco paint finish, broad posture and modern honeycomb kidney grille will attract attention on any road. The electronically controlled soft top can be retracted in as little as 10 seconds and at speeds of up to 31mph. As well as the effortlessly operated roof, the electric folding mirrors add to the graceful touches of the Z4.
The wing-shaped side panels, alongside the instrument cluster which can be individually tailored, create an extremely refined design. Inside, the ambiance is equally sophisticated thanks to the lighting, M Sport seats and sound insulation.

Driving Dynamics
The BMW Z4 M40i First Edition accelerates from 0-62mph in an impressive 4.6 seconds with the M TwinPower Turbo 6-cylinder petrol engine, which releases 340hp and 500Nm of torque. BMW Z4 models are also available with 20i and 30i engines, which offer 197hp and 285hp respectively.
The model impresses further with its firm suspension, short-wheel base and even weight distribution, which delivers exceptional handling and incredible agility.
Not only progressive in its design, the BMW Z4 is home to the state-of-the-art Operating System 7.0, also recognised as iD7. The smart system provides drivers with intuitive and personalised controls and is supported by BMW Live Cockpit Professional, which has a beautiful touchscreen display.

The BMW Z4 M40i First Edition
This exclusive model fuses together the athleticism of a roadster with the agility, precision and dynamic handling characteristic of BMW M Performance models. The BMW Z4 M40i First Edition boasts a refined yet sporty appearance alongside the exclusive and attention-grabbing metallic body paint in Frozen Orange metallic. Limited to just 444 units worldwide, 45 of which will be coming to the UK.