The anticipated release of the sophisticated 570S Spider pushes McLarens prestigious brand name to a whole new level combining all of the performance elements from the Coupé with the additional luxury of open-air driving and the ability to achieve speeds of 0-124mph in just 9.6 seconds. The sleek 570S Spider model is hand assembled and comprises of countless exhilarating supercar aspects. The carbon-fibre construction allows it to compete against its expensive rivals as it is the lightest car in the segment. 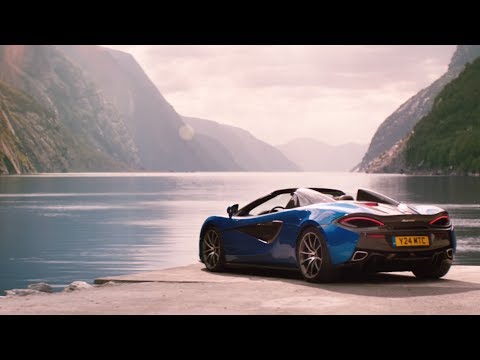 The exceptional performance of the 570S Spider goes hand in hand with the supercar image. The roar from the all-aluminium twin-turbocharged McLaren 3.8-Litre V8 Engine sounds as if you’re fresh off the racetrack and provides you with the ultimate driving experience. The sheer adrenaline and thrill when driving the 570S Spider is unforgettable as you glide through the impressive 7 gear box seamlessly reaching speeds of up to 328 kph/204mph with the roof up. Alternatively, you can select automatic mode and take control by using the steering wheel.

The inspiration for the McLaren 570S Spider technology originates from Formula 1™ and has been transferred to the Sports Car Industry including brake steer and gearshift indicators. In addition, the choice is yours when it comes to the exceptionally skilled ceramic or cast brakes.  Overall, the McLaren 570S Spider has been built purely for your enjoyment.

The exterior of the 570S Spider is the definition of luxury and performs extraordinarily low to the ground as if ready to pounce into action overall emphasising the magnificent mid-engined layout creating a perfectly balanced car. The organic curves of the McLaren 570S Spider contribute to an exceptional and unique shape and ensure your eyes glide over the model from one end to the other.

What really sets the 570S Spider apart from the competition is the addition of a two part retractable hard top roof mechanism taking just 15 seconds to fully retract even at speeds of 25mph and completely disappearing into the works of the car. The breath taking and iconic McLaren Diherdral Doors feature was inspired by the phenomenal McLaren P1 providing that additional indulgence as well as making it easier to get in and out. The trademark McLaren Speedmark LED lights complement the 570S Spider’s sharp and bold front appearance and the Spider Alloy Wheels are powerful yet lightweight strengthening the model’s appearance.

To express your individuality the 570S Spider has a selection of 20 premium exterior colours available including Curacao Blue, Vega Blue and Sicilian Yellow.

The 570S Spider has been named the most exclusive car in the segment due to its impeccable interior and exterior design with every detail being purposely placed. The luxurious cabin has a surprisingly large storage capacity in comparison to its rivals with 52L with the roof down and another 150L storage capacity in the front. The model has been designed with the finest leather and the unique two-seat cabin is finished with Carbon Fibre and Alcantara. The 570S Spider incorporates a TFT LCD screen instrument which for the first time includes turn-by-turn instruction.