Business Contract Hire (BCH)
Prices shown exclude VAT and are available to a certain category of business user only. Annual mileage can be tailored to your needs. Ask for full details.
Find Out More

Business Contract Hire (BCH)
Prices shown exclude VAT and are available to a certain category of business user only. Annual mileage can be tailored to your needs. Ask for full details.
Find Out More

All new BMW X1 has the power and the presence to turn heads. With its broad, assertive stance and strikingly athletic features, the X1 has been remodelled into a car with a dynamic, active and powerful personality and offers its passengers an exceptional sense of both space and luxury. Equally, the exterior and the interior of the car showcase distinctive and emblematic design elements of the X range; a category and class of car that is created exclusively for those with a requirement for real quality and a sense of adventure. 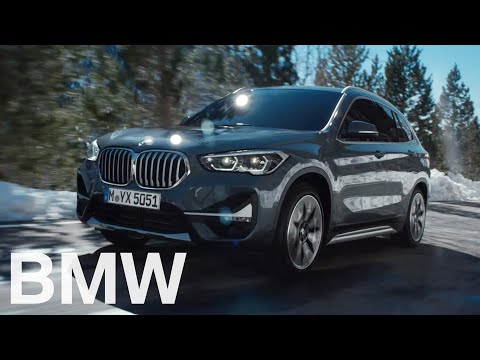 With a long wheelbase and short overhangs, the X1’s exterior silhouette features a sculpted bumper, broad wheel arches and muscular lines that give the car an instant sense of importance when merged with its sportingly compact peripheral proportions.

Add four LED daytime running lights and raised fog lights that come as standard on xLine and M Sport models alongside 18” alloy wheels and dual sided exhaust pipes and you have a model that has been created with distinguished ‘X’ credentials and with power and its core.

Complementing the car further is a range of trimmings that are available on the different model derivatives. The BMW X1 xLine features an exclusive Satin Aluminium exterior that fully encompasses the car to provide a suitably refined edge, while the Sport and M Sport models both feature additional elements that accentuate their agile looks including a unique High Gloss Black exterior trim on the Sport model and body colour and High Gloss Shadowline exterior touches on the M Sport.

On the interior, the X1 is also dressed in premium materials throughout. From the sport leather steering wheel, the dashboard, doors and centre console to the BMW Navigation with the signature iDrive controller as standard the X1 is as smart on the inside as it is on the outside.

With a noticeably higher roofline, the X1’s interior cabin takes advantage of greater headroom, visibility and comfort, while those sitting in the back also benefit from extra legroom and optional sliding rear seats. Under seat storage, 505 litres of boot space and multiple other compartments also contribute to the increased interior space and added luggage capacity of the BMW X1.

Available in either petrol or diesel BMW TwinPower Turbo engines in four cylinder configurations, the X1 promises the performance and power expected of that of a larger engine while the driving experience is enriched by features such as Dynamic Damper Control that delivers superior handling in all situations and Brake Energy Regeneration which helps ease emissions and significantly reduce fuel consumption while leaving more powerful available for acceleration.

Such innovations and efficiency set the BMW X1 apart from its competitors, making it unmistakably ‘X’ and the most modern and vehicle in its segment.

Free vehicle valuation Thinking of selling your vehicle? Get a free no-obligation market valuation of your vehicle from the team at Douglas Park BMW. Get Free Valuation
Back
Book A Service
Vehicle Valuation
Compare Saved Vehicles
Top
Close
Your Cookie Settings
Select your cookie settings
Strictly Necessary Strictly Necessary cookies are essential to let you move around the website and use its features, such as accessing secure areas, shopping baskets and online billing. These cookies allow our website to provide services at your request.
Performance Performance cookies collect information about how you use our website e.g. which pages you visit most often, and if you experience any error messages. They also allow us to update our website to improve performance and tailor it to your preferences. These cookies do not collect any information that could identify you - all the information collected is anonymous. They will not be used to target adverts to you on other websites.
Functional Functionality cookies are used to remember the choices you make, e.g. your user name, log in details and language preferences. They also remember any customisations you make to the website to give you enhanced, more personal features.
Targeting Targeting cookies collect information about your browsing habits to deliver adverts which are more relevant to you and your interests. They also measure the effectiveness of advertising campaigns.
Save Settings
Cancel Changes